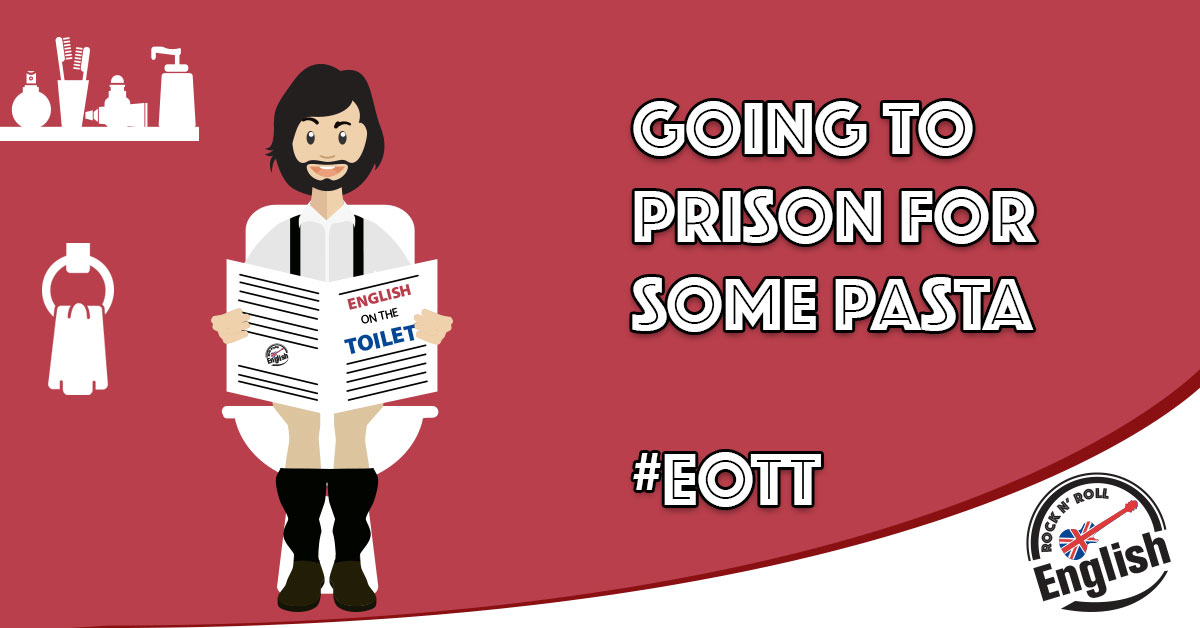 Going to prison for some pasta

READ the story. READ the RnR Grammar. DO the quiz and…. ROCK ON!

I was in the pub with my friend Adam, just outside London. The weather was nice, so like all English people do on a sunny Saturday, we went to the pub. We had about 3 or 4 beers, they it got to about 7 o’clock and we decided to go and get some food.

We went to a nice Italian restaurant, sat outside (eating outside is something very rare in England), had a lovely antipasto, then a nice plate of pasta. We were still hungry so we asked for the menu.

“One minute” the waiter said.

So we waited patiently.

10 minutes passed and we still didn’t have the menu.

“One minute” the waiter said again when we asked him.

Another 10 minutes passed. Nothing.

“Excuse me, we’ve been waiting 20 minutes now for the menu, could you please bring it to us?” my friend asked politely.

“One minute” he said again.

After about 6 – 7 minutes, my friend said to me “let’s go”. “We can’t”, I said, “we haven’t paid”. “We will just walk away slowly. If they say anything, we will just say ‘we thought you had forgotten about us’. Which is also true”.

As I was a bit drunk, I said yes. So we walked away slowly. No-one came.

When we got to Adam’s house, we realised that we had done something stupid, but we thought “people probably do this all the time. It was their responsibility because of the terrible service, we shouldn’t feel bad”.

The next day I woke up with a bit of a [simple_tooltip content=’When you feel sick the next day after drinking and I started to feel really guilty about it. I spoke to Adam and he suggested going back to pay the bill.

A couple of days passed and everything was normal, then on the Tuesday I was at work; I go home, then an ex-girlfriend called me. It was strange for her to be calling me, especially on a Tuesday afternoon when I was at work.

“Hi, what did you do last night?” she asked.

I thought it was strange that she didn’t ask me how I was, but I didn’t think much of it.

That was the name of the restaurant we went to. At this point I started to panic.

“Did you go away without paying?” she asked.

Now I really started to panic.

“Errrrrr….. maybe…… how do you know this?” I asked in a very worried voice.

“It’s all on Facebook” she said, “the restaurant have your pictures on CCTV and have published your photos with a message saying ‘these people didn’t pay for their dinner last night, help us find them’. What were you thinking?!”.

At this point I couldn’t talk. I quickly looked on the computer and saw she was right.

I hung up the phone, put my clothes on and got in the car to go to the restaurant. I got on my knees, begged for forgiveness! Luckily they didn’t kill me, but I think one of them definitely wanted to. They told me that there would have called the police!

Lesson learned: Even if the service is rubbish, don’t go away without paying!

P.S. After you read the RnR Grammar and do the quiz, remember to look at the photos at the very bottom of the page!

In the sentence ‘we thought you had forgotten about us’, we say ‘had forgotten’ about us as it is the Past Perfect.


And finally… here are the photos. 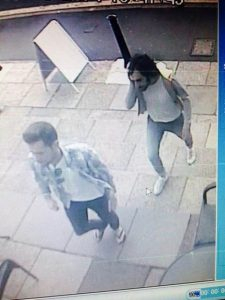 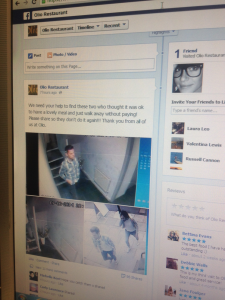 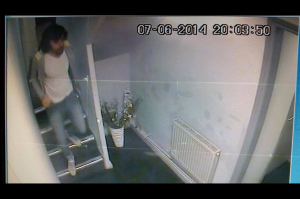